PARKING: Parking is available at the Discovery Center off the Kancamagus Highway. There are parking spaces for approximately 10 cars plus a bus or two. 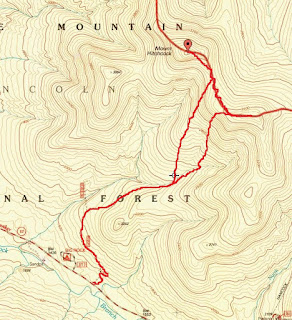 DESCRIPTION: From the Discovery Center follow the interpretive trail looping around the trail system. You can head either right or left on the trails, both directions are approximately 0.5 miles and will bring you to the overgrown path angled into the woods at N44 02.870, W71 33.293. The path begins in heavy overgrowth but soon clears and widens as it gradually ascends 1.3 miles to an open field (shown on Google Earth) at approximately 2100 feet. The beta I found suggested crossing the stream and taking a NE bearing to the col between South and Middle Hitchcock however I found a faint herd path on the north (left) side of the field that continued another 0.5 miles along an extremely overgrown logging road following the right side of a small stream branch (see map) to 2400 feet. I crossed the stream and set a bearing for the col finding some clean lines with better than expected bushwhacking through brutally steep woods. Things got thicker with 0.4 miles to the col but would result in 100 yards of moderate woods then 100 feet of (not long enough to be frustrating) thick woods (still brutally steep). Once reaching the col it was a 0.2 mile high-step over pencil thin blowdowns to the South Hitchcock summit. I followed my path to the col and attempted to stay along the northeastern side of the col but the woods kept pulling me to the southwest. I zig-zagged through Ok woods to about 3250 then things got thicker, steeper and heavier with blow-downs and evidence of bear, lots of evidence. The final pitch was a challenge, but the relief of knowing it was the final pitch was motivating. I signed the log approximately 3 hours after beginning the trek.

I followed my track log back to the col then made the mistake of making a bee-line directly to the end of my marked path. These were the thickest, heaviest and longest duration of heavy bushwhacking I've encountered and can understand the mountains nickname of 'Bitchcock' because if anyone attempted to ascend this route it was completely full of nastiness and I'd understand the cussing. I eventually found the stream branch, crossed and ascended to the path retracing my steps back to the Discovery Center.

There are a total of 5 Hitchcocks on the NH3000 list, South at 3500 feet, West at 3064 feet, North at 3194 feet, East Hitchcock (or West Hancock) at 3331 feet and the 3600 foot summit of Middle, Hitchcock being the highest and only peak on the NH 100 Highest list (South, Hitchcock was removed from the list due to a lack of col (~180 feet) however due to inaccuracies in surveying equipment and current contour lines the elevation is marginal and the col depth is marginal giving it the potential of being a formally listed NH100 peak. The bushwhack to the Hitchcocks is regarded as one of the most difficult in the state. I was glad to find the herd path leading to 2400 feet and my chosen bushwhack route was challenging due to the steep incline but I found some clean lines and only patchy sections of thick woods. There are no views from either summit. Both have PVC summit canisters (I've heard South Hitchcock has several (more than 2)). Middle Hitchcock has a sign. I feel good about getting the two highest peaks out of the five NH3000 footers.