PARKING: From Route 3 in Stratford look for a sign mrking Lamms trail on the right. The road skirts the edge of an open field, continues past a trio of camps goes through an open gate for 1.5 miles to its terminus at N44 43.396, W71 34.199. I parked in an open clearing after 1.15 miles.

On my topo maps, google earth and automobile navigation system this road is shown as Bissell Road. As I arrived the road was signed Lamms Trail.

My original plan was to follow a logging road I saw on Google earth then bushwhack to the col between 3380 Foot Teapot Mountain and Savage Mountain but I drove too far on Lamms trail, all the roads and ATV trails I encountered ended up heading straight for Savage Mountain. I modified my plans and headed for the Savage and Spruce col.

From the end of Lamms trail I continued east on a ATV trail (barely shown on Google earth) that paralleled a tributary of Smarts brook to where it petered out in a muddy section at 2450 feet. I bushwhacked a short distance popping out on an wide logging road. I followed the logging road in a northeasterly direction to 2525 feet where it makes a U and changes direction. From the U bushwhack in a northeasterly direction to the summit. The bushwhack is through moderate woods with a few minor (50 to 100 feet of) thick bands making it somewhat challenging but the woods aren't impenetrable or frustratingly thick. I would recommend bearing to the north when possible to avoid section of cliffs near the 3100 foot elevation contour as shown on Google Earth. My route chosen is shown below. I've seen trip reports that describe the bushwhack as trivial through open woods to thick and heavy. The route I chose is neither trivial or extreme. It got me to the summit, use it at your own discretion. 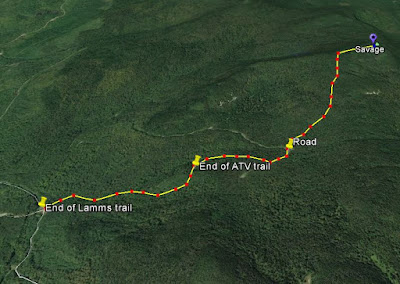 At 3510 feet, Savage mountain ranks at #101 on the list of 102 mountains in New Hampshire over 3500 feet. In addition, it's 1360 foot prominence makes it #69 on the most prominent peaks list. The summit contains a standard PVC canister with a log book and does not have any views.

Posted by HockeyPuck at 7:24 AM