From route 302 in Twin Mountain look for Zealand campground. Follow Zealand road 1 mile to a parking area on the right. The trailhead is just across the wooden bridge. The Sugarloaf's are a popular hike and the lot fills up quickly. Overflow roadside parking is available on Zealand road. A $3.00 self service parking fee applies. 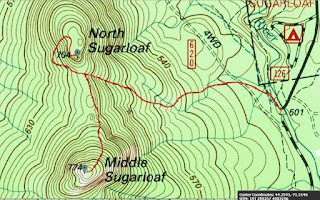 The Mt. Sugarloaf trail enters the woods after crossing the wooden bridge over the Zealand river. The Mt. Sugarloaf trail and Tressle trail parallel the Zealand River for a few hundred yards to a trail junction where the Tressle trail continues straight and the Mt. Sugarloaf trail bears to the left. The well trodden trail is extremely easy to follow as it passes several large glacial erratic boulders. The incline steepens over rocky steps for 0.9 mile to a T junction in the col between the two peaks. Middle Sugarloaf is 0.4 to the left (south) and North Sugarloaf is 0.3 to the right (north). The 0.4 miles to Middle Sugarloaf begins softly following a zigzag pattern before becoming very steep. A wooden staircase leads you up the final pitch to the open faced granite summit of Middle Sugarloaf which offers panoramic views of the surrounding peaks. South Sugarloaf and Hale are directly to the south. Mt Washington and the Southern Presidential range are directly to the east and North Sugarloaf can be seen to the north.

At 2359 feet, Middle Sugarloaf isn't tall enough to be on any elevation lists and the 1.3 mile journey to it's peak isn't long enough to consider this a solo hike. The open granite slabs on the summit make the views one of the best in the white mountains and Middle Sugarloaf has been placed at #51 on the New Hampshire 52 with a View list. North Sugarloaf is a short and rewarding side trip allowing for two mountain checks on a single hike. I wasn't able to find a distinct bump or any markings defining the North Sugarloaf summit. I suspect the high point is the bump the trail passes just beyond the open ledges and lunch table sized boulder.