PARKING: Parking can be found at The AMC Highland Center and Crawford Depot on route 302. Drive time from Manchester is approximately 2 hours. 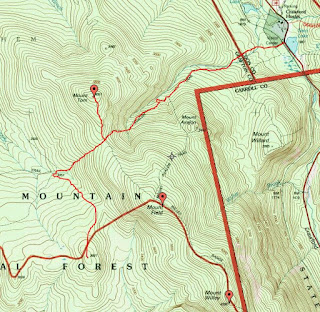 The Avalon trail enters the woods behind the Crawford Depot train station soon reaching a empty trail kiosk.  The trails were well used this winter and due to the early spring, a sheet of ice.  Micro-spikes or instep crampons are mandatory for anyone attempting this ascent before the spring melt. The Avalon trail ascends gradually paralleling and crossing an unnamed brook. A spur trail makes a exciting loop to Berlin and Fletcher Cascades returning a short distance further along the trail. the Avalon trail makes a second crossing of the unnamed stream and at 1.3 miles meets the junction with the A-Z trail.  The A-Z trail ascends to a stream crossing then climbs steeply to a 4th and final stream crossing at approximately 3450 feet elevation marks a short reprise from the brutally steep elevation gain before the trail reaches the col and the Mt. Tom spur trail.  In 200 Ft the Willey Range trail departs to the left (South) and A-Z trail descends westerly towards Zealand Notch.

To hike West Field Descend the A-Z trail 0.4 miles to approximately 3050 feet elevation where the A-Z trail crosses an unmarked old cross country ski trial (GPS coordinates N44 12.072, W71 27.134).  Cross a small stream to a small open field.  Here the cross country ski trail bears left and follows the stream a short distance before petering out after 0.15 miles.  Penetrate the spruce to a relatively open woods bushwhack to the West Field summit.  The bushwhack never got too steep and encountered a moderate band of trees 0.2 from the summit but it was short lived with minimal resistance. The woods opened up to the 3691 foot West Field summit.

Follow your foot steps the way you came. After returning to the A-Z trail and col I would recommend the 0.6 mile side trip to Mount Tom. The Summit is marked with a small cairn and a nearby outlook offers phenomenal views into Zealand notch including West Field which can be seen to the South.

West Field was the goal of this trip.  It is #70 on the list of New Hampshire 100 highest and Mt. Tom was a short 0.6 mile side trip. I was glad to have the company of Wemedge along for this hike as the Avalon and A-Z trails were much steeper than I remembered and I needed the company as my lungs burned and heart pounded in my chest. Traction was essential for this ascent, Wemedge and I put on micro-spikes and in-step cramp-on's respectively shortly after we commenced the hike.  We used snowshoes once we began the bushwhack. There is a PVC canister on the West Field summit there are no other markings or views.

A nice alternative route would be to include 4000 footer Mt. Field which is a 0.9 mile side trip along the Willey Ridge trail.  Descend via the steep Avalon trail to the junction with the A-Z trail.