PARKING: From Route 3 in Columbia turn right at the Irving gas station onto the one lane Washburn Rd. Continue 1.5 miles and park at the gate. 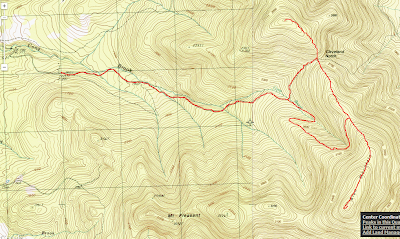 I didn't expect to find Washburn Rd gated at 1.5 miles and had hoped to park 2 miles deeper east. I cursed my poor planning. The gate caused me an unexpected 4+ miles of road walk. The very cool temperatures and trace snow falling caused me to pick up my pace and I was sweating when I reached Cleveland Notch hiking 3.25 miles in just over 60 minutes. I planned to make the short out and back to North Blue returning to Cleveland Notch then traverse the ridge south to Bunnell continuing west attempting West Blue (and possible Mt. Pleasant). At the height of land in Cleveland Notch I found a 4x4 trail and followed it North towards North Blue. The trail petered out at a section of hobblebrush however I was able to pick up a single track trail in approximately 100 ft. It was my only bushwhacking the entire day. The unmarked trail headed through open woods directly to the N. Blue summit. The N. Blue summit is marked with a PVC canister with the last entry by K-Dawg and Julie on 8/10/13. I signed in chuckled at a cartoon and returned to Cleveland Notch. My spirits were high after finding the unexpected trail to North Blue and my good karma continued as I followed the unmarked trail south. The trail was in great condition with easy grades, moderate ascents and minimal overgrowth. I encountered my first moose antler at ~3300 feet and considered taking it home however it was much heavier than I expected so I left it for another hiker (or rodents). The Bunnell summit canister was easy to spot at the highest point and I was very surprised to find fresh footprints in the snow and a register entry by Wayne R. earlier this morning. I was getting chilled from the unexpected snow and decided to skip West Blue leaving a NH3k dangler for another day. I followed my footprints 1.2 miles to a clearing then followed a logging road 1.4 miles back to Washburn road, only 2.6 miles back to the car.

Washburn Rd wasn't shown on my GPS topo maps and was a challenge to find. From initial appearance the road didn't look like it traveled deep into the woods and took me a few drive-by's before believing it was the correct road. Finding Washburn road gated after 1.5 miles requiring a long gravel logging road walk really dampened my spirits. I was pretty hot and sweaty after hiking the 3.25 miles in just over 60 minutes and cursed myself for overheating in a snow squall and the frigid temps.

3723 foot Bunnell Mountain is the highest mountain north of the White Mountain National Forest. It was originally known as Blue Mountain but renamed in 1998 in memory of former Colebrook selectman and part-time judge Vickie Bunnell, who was killed in August 1997. Vickie Bunnell often climbed the mountain in her spare time. More information about the Bunnell Legacy tract can be found here: Bunnell Legacy Tract. 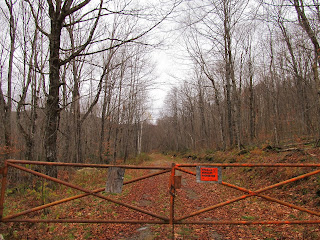 The gate on Washburn Rd. 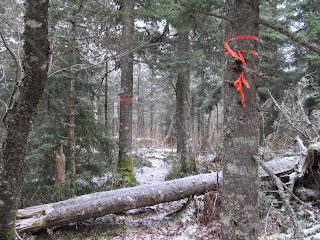 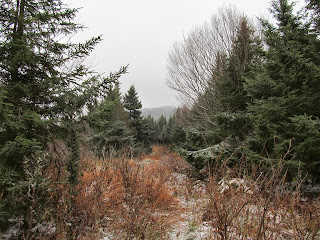 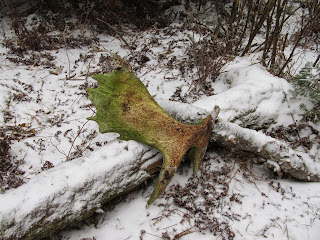 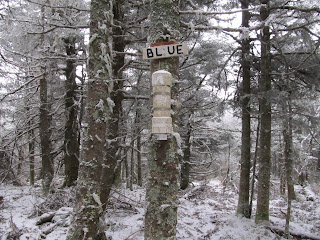