From Route 2 in Lancaster, at the center of town turn on to Middle street (also North road) for 2.0 miles. Turn left onto Grange road following it 2.0 miles bearing left on Lost Nation road. Follow Lost Nation road 1.9 miles to Herman Savage road on the right. Follow Arthur White Rd 0.35 miles to the house at it's end. 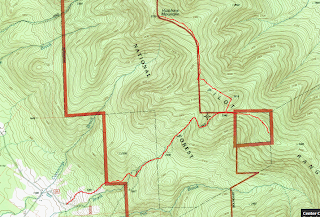 Previous reports describe access from a private trail at the end of Arthur White Drive. The property appears intimidating with no trespassing and no hunting signs however as you get closer it mentions hikers are welcome with permission. I parked in a small parking area below the house, knocked on the door and spoke with the property owner Joe who was extremely friendly and welcome to hikers (as long as you don't have a motorized vehicle or gun) using his land. He described the trail in detail and offered some sound advice. The mowed grassy trail leads up the right edge of the property fields then continues into the woods. At the first Y bear left, at the 2nd intersection bear right. After approximately 1 mile the grassy road ends and impressive trail (that's right I said trail) enters the woods. The trail is unmarked but very easy to follow as it moderately ascends over an easy grade through hardwoods paralleling a stream to your left. At 2700 feet the trail bears right, increases elevation and gains the ridge along a contour of Middle Pilot. The trail continues northeast descending to a cabin and continues past the cabin to the wooded 3560 foot summit of Mt. Mary. There is a wooden summit register box marking the summit.

Return past the cabin to the height of land on Middle Pilot and I made a straight line bushwhack through heavy spruce trees and loose moss footing gaining the Middle Pilot summit relatively quickly. The summit has no views but is marked with a PVC canister very high on a tree.

From Middle Pilot I heeded the advice I received from Joe and descended along the northeastern side of M Pilot bearing in an easterly direction whenever I encountered thicker sections. It was awesome advice and I descended through a very healthy fern glade with an occasional blowdown to the col. My luck continued along the eastern ridge of Northwest Pilot to it's summit. Northwest Pilot doesn't have enough of a col to be counted on most New Hampshire lists and I wondered if there would be any markings or canister on it's domed summit. The highest point was a challenge to find and after wandering in circles performing a drunk bee dance I found a glass jar mounted to a twin white birch tree.

I continued an open woods bushwhack. My only complaint was the excessive rain over the past few days made the ferns strong, tall and healthy causing the inability to see my footing through the fronds and occasionally catching a blowdown in the shin. The blowdowns and terrain pulled me to the east of the col and I had to adjust my bearing to catch the centerline of the col to ascend Hutchins. My good bushwhacking karma faded resulting in very thick whacking along the centerline of the ridge. I attempted to float east and encountered waves of ferns mixed with heavy fir trees and a rare herd path. This continued approx. 0.3 miles before I hit a demoralizing 15 - 20 foot tall band of cliffs. I managed to find a notch to weave my way up and was rewarded with open woods for approximately a tenth of a mile before a very thick section just below the summit. I broke through directly under the PVC canister and found limited views to the east. There is also an open area to the west approximately 75 feet from the canister with directional views to the South.

I wasn't excited about the return bushwhack and descended in a easterly direction much further east than I was comfortable with however found very open woods (avoiding the thick stuff, cliffs and fir waves) all the way to the col. I bypassed the NW Pilot summit following a high contour on the eastern side of the peak and descended to the col ascending Middle Pilot. I made a significant error in judgment to avoid the Middle Pilot summit by following a low contour along the western side of M. Pilot. It was a huge mistake and I encountered very difficult terrain. The steep western slope of Middle Pilot was littered with blowdowns and mossy covered boulders with insecure footing slowing my pace to a screeching halt. I would highly recommend returning back over the top. I exited the woods about 100 feet from my height of land entrance point and enjoyed following the well defined trail back to civilization.

Joe was in his barn as I passed and I stopped to thank him for allowing me to cross his property, complimented the excellent condition of his trail and expressed my thorough appreciation for his advice "Stay to the east of the ridge". Round trip was 5 hours and 15 minutes.

*NOTE** - All trail distances below are approximate

After arriving at the end of the road on Arthur White Dr. I was a bit apprehensive to chat with the land owner after seeing several no trespassing and no hunting signs. I found the courage to get out of my car and take a closer look and found the property owner welcomes hikers and is extremely friendly.  He described in detail the trail leading all the way to the Mt. Mary summit and suggested I stay to the east along the ridge.  His advice and tutelage made this a very easy hike and bushwhack. 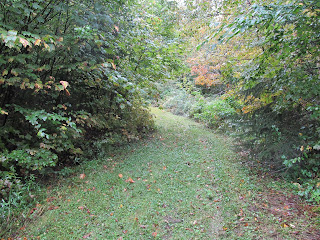 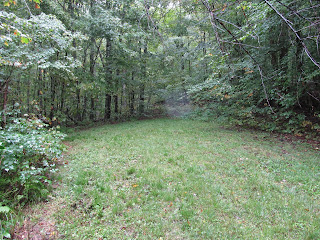 The end of the mowed path and trailhead ascending Mt. Mary 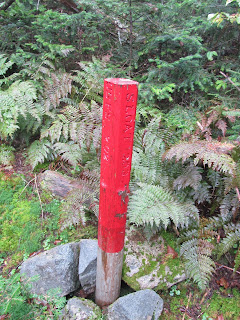 A property marker.  I suspect this is the upper left corner of the red square on the map above. 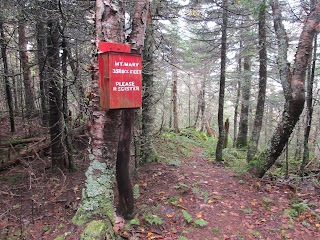 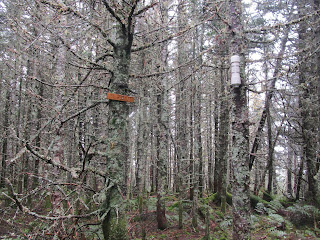 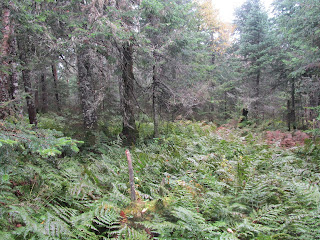 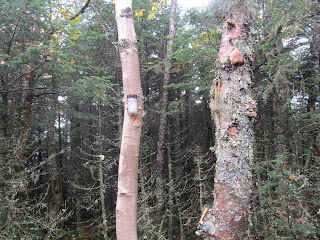 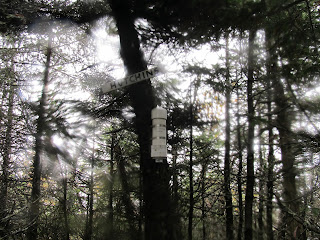 3730 foot Mt. Hutchins summit sign and canister.
Posted by HockeyPuck at 8:35 AM