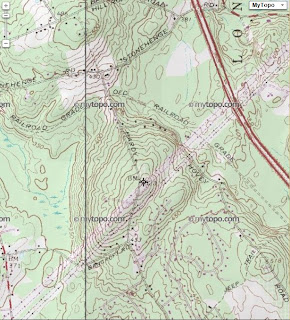 The summit is approximately 80 to 100 Ft from the parking area under the power lines access road. the summit was not obvious and I found two high bumps as the possible summit location.  I stood on both high points and the illusion that the opposite highpoint being the actual HP appeared at both locations.  Using a GPSr I found a small rock (big enough to stand on) at coordinates N42 53.417, W71 22.124 to be a few feet higher than it's counterpart.  There are no obvious markings to decipher the summit.

Wikipedia describes the Londonderry highpoint as the following - "The towns highest point is 535 Ft. above sea level on "Number eight Hill" (named after the old school house that used to be on it) North of the center of town".  I hoped for a more eventful trip to the highpoint and I looked for potential remains of the old "No. 8 school" however the only historical man made object was a rock wall in disarray leaving me mildly disappointed. The picture below shows the power line access road and summit dome area. 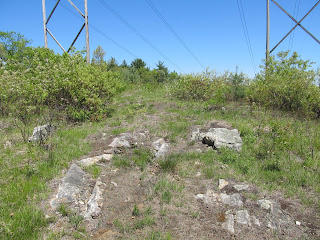 I determined the highpoint to be the granite rock behind the small white pine tree. 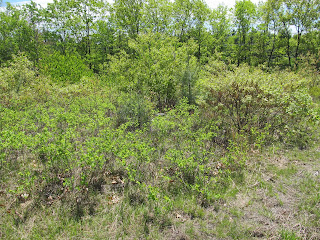 Posted by HockeyPuck at 1:39 PM