PARKING: From route 87 take route 9 North for 6 miles. Off road parking is available on both sides of the road. The trail head is on the right hand side. 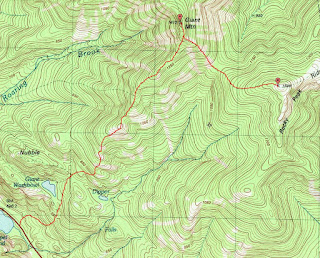 The Zander Scott trail is marked with blue disks stating "foot travel only" and begins a steep relentless ascent up the western ridge of Giant Mountain. The rugged terrain parallels a dry river bed crossing it twice before encountering a series of switchbacks quickly rising in elevation. At a 3rd crossing of the dry river bed the trail makes a steep pitch up a rocky ledge to your first in a series of many viewpoints along the trail. Continue over a short flat section to the border of Giant Washbowl pond. Cross the footbridge and continue ascending a short distance to the Nubble trail junction departing to the left. The Zander Scott continues it's steep rocky ascent making several switchbacks before reaching a series of granite slabs. The terrain is rough requiring hand and footholds over several technical sections. The bare slabs offer increasingly spectacular views of the Dix range, Nipple Top and Dial. After 1.5 miles you'll reach the 1/2 way point and the approximate trail split offering the option of continuing Over Bump or Around Bump. I chose the around route enjoying the short level section before merging with the Over Bump trail option. Continue the brutally steep ascent reaching the Roaring Brook Trail merge at 2.2 miles. From here it's a 0.65 mile trek to the East Trail beginning with a gradual ascent for a few tenths of a mile then ascending steeply to the junction of the East trail leading to Rocky Peak Ridge. the 1.2 mile East trail descends extremely steeply (1000 feet in 0.5 miles) down a technical and difficult climb to the col before the trail levels for a short destance then begins it's moderate ascent to Rocky Peak Ridge. The ascent is mostly wooded but opens to panoramic views at the summit. Return the way you came and continue 0.1 mile leading to the open summit of Giant Mountain. The summit is marked with a benchmark disk and provides spectacular views of the Adirondack mountains to the west. Well done!

At 4625 feet Giant Mountain is the 12th highest peak in the state of New York. It has a significant elevation gain over rugged, rocky and terrain ranging from steep to brutally steep. Rocky Peak Ridge is 1.2 miles to the east and Giant Mountain is often combined with Rocky Peak. The 1.2 miles contains a 1000 foot drop to a 700 feet incline over it's 1.2 mile distance. The Zander Scott trail offers spectacular views of the Adirondacks over nearly it's entire distance. The originally named Ridge Trail was renamed Zander Scott in 1992. 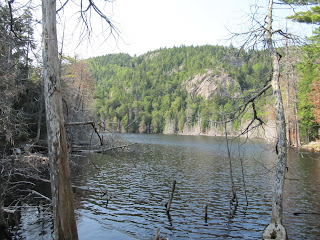 The Nubble from the perimeter of Giant Washbowl 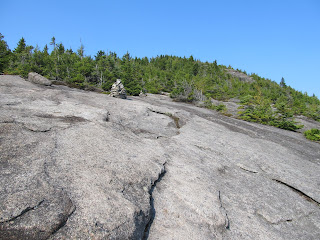 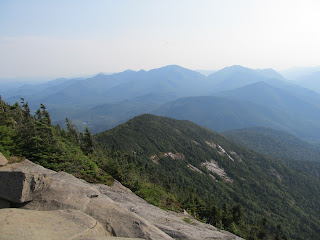 The Dix range from the Giant Mountain summit.* 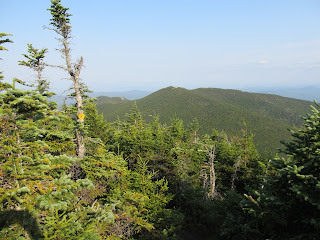 
*- This was my first experience in the Adirondacks and I was out of my element when detecting nearby mountains and ranges.  The peaks depicted are named to the best of my ability however may contain inaccuracies.
Posted by HockeyPuck at 8:32 PM