PARKING: Take Tim Pond Rd to Canada Rd North then cross bridge to Wiggle Brook Rd and drive north along an unknown logging road to White Cap and North Kennebago Divide access. A few mud puddles and pot holes along the way but the road is easily drivable to a AWD vehicle. 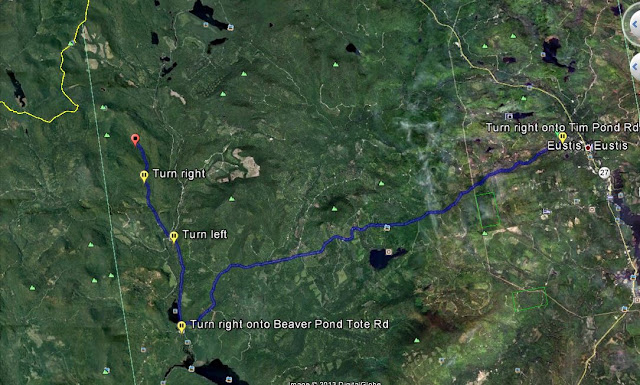 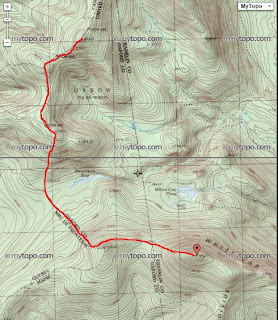 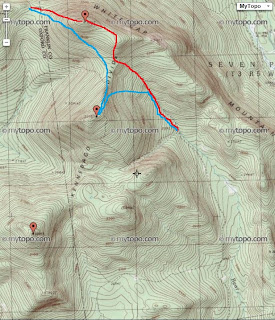 MAP NOTE:  The red line marks the ascent and blue line is descent.

DESCRIPTION:
From parking we took a 4 x 4 trail to the height of land on White Cap. At the height of land we began a relatively easy bushwhack North to the White Cap summit. Continued bushwhacking North through thick spruce, open hardwoods and very thick spruce to the Maine - Canada boundary swath. Followed the swath approx. 3 miles through hunter stands North to Northeast. It was extremely muddy through Denison Bog area then dried out for the ascent to Boundary / Panther Peak (between monuments 445 and 446). Returned the same way.  During the bushwhack back to White Cap we descended into the col between White Cap and North Kennebago Divide then bushwhacked through pretty thick spruce scrub to the North Kennebago summit.

We began our journey ascending a primitive 4 x 4 trail and quickly reached the height of land on White Cap. From here we began a relatively easy bushwhack almost directly North to the summit proper. According to Nick's watch we reached the White Cap summit in 51 minutes. After a snack and brief photo-opportunity we continued our trek, bushwhacking north descending through thick spruce, leveling into open hardwoods and continuing along the elevation contour through thicker and thicker spruce to the US - Canada boundary swath. Walking the swath with one foot in the United States and the other foot in Canada was a unique experience, making it more surreal were the plethora of hunter stands every few hundred feet. I'm glad I didn't attempt this hike during prime season last October. We continued north - Northeast along the swath which became extremely muddy through Denison Bog area then dried out for the ascent. After 3 hours of hiking we finally reached the Boundary Peak summit at 12:30 PM. Bill handed me a bottle of champagne and we celebrated my 100th peak with a brief toast. Perhaps I was on an endorphin high from bagging my hundredth but the 3 mile return along the boundary wasn't nearly as long or difficult as the ascent. We regrouped at our bushwhack point of entry debating on whether to follow our footsteps over White Cap or whether creating a direct route to North Kennebago Divide would be more ideal. We started directly for North Kennebago but as the terrain got thicker we opted to return via the White Cap summit following our open woods footsteps then descend the col between the 2 peaks leaving a 0.6 mile bushwhack along a very overgrown herd path to North Kennebago Divide. The bushwhacking was thicker than I remembered from a few years ago but we reached the summit without incident and signed into our 3rd canister of the day. After a relaxing (almost effortless) descent to the car we changed into cleaner and drier clothes. Round trip was approximately 11 miles and 7 hours and other than a few scrapes, bruises, muddy boots and a few moose had a uneventfully fulfilling day.
Posted by HockeyPuck at 3:41 PM